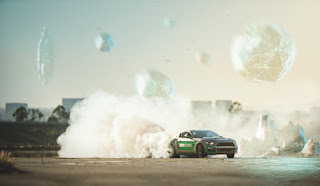 I'm a regular viewer of the BBC Click technology programme on the BBC News channel (@BBCClick). It covers a broad variety of technology subjects in a very accessible manner - ideal Sunday morning viewing.

Until this weekend's Click I'd always associated virtual reality (VR) headsets with not-quite-there software along with games that involve shooting aliens. No more! If you're able to view Click on iPlayer, jump to 21 minutes 19 seconds in this week's episode and see Spencer Kelly introduce a car being driven by a driver who is wearing a VR headset. Awesome. I want one!

If you can't view iPlayer in your region of the world, take a look at Engadget's more detailed backgrounder and link to the associated YouTube videos a) the (somewhat over-produced) final advert for Castrol oil and a behind the scenes view.

If/when I get a VR headset I want one of those Mustang controllers with it! 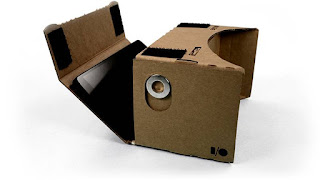 Actually, if I'm honest, we have a couple of VR headsets in the house already. They're cheap and they're great fun. I'm talking about Google Cardboard. Upon delivery from Amazon, and after folding our £15 headsets into shape, we insert our Android phones, and we have a great VR headset.

One of the first (free) apps I viewed on the headset was Paul McCartney. You don't have to be a fan of Sir Paul's music to get a buzz from standing on the edge of the stage whilst he and his band perform Live and Let Die, with fireworks aplenty. A great introduction to VR.

The Cardboard app itself provides a launcher for the various cardboard apps on your phone. YouTube has a growing number of 360-degree videos that work nicely with Cardboard. Have fun!
Posted by Unknown