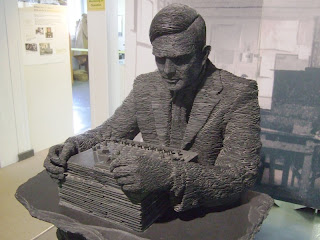 In December 2012 I wrote of my family's visit to Bletchley Park in Central England. Bletchley has a remarkable history and we enjoyed discovering its contribution to computer science along with that of Alan Turing.

In the article, I mentioned the tragic circumstances surrounding the end of Alan Turing's life (in brief, he was a homosexual in 1950's Britain, he was convicted of gross indecency, accepted chemical castration as punishment, and subsequently died soon after - having taken a draft of cyanide, possibly as a suicide attempt). I mentioned an official public apology from Prime Minister Gordon Brown made in 2009 and a growing campaign for a pardon for Turing.

I was pleased to see that Alan Turing was indeed granted a royal pardon on December 24th, i.e. two weeks ago. Whilst some people think that a royal pardon for someone who has been dead for nearly 60 years is meaningless, I agree with those who consider that the pardon rights a wrong and provides some kind of recognition for a man who contributed so much to his country and to computer science (virtually all of which was secret until the mid-70s).

I still await my copy of Sue Black's Saving Bletchley Park book (which nears completion) but, in the meantime, I have enjoyed reading Robert Harris's Enigma and Jack Norman's Broken Crystal - both being fictionalised accounts of activities at Bletchley Park during World War II.
Posted by Unknown