The (Mostly True) History of Computing 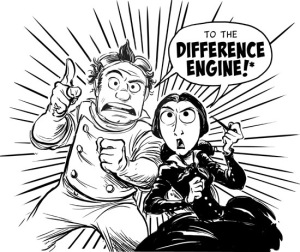 I'm half way through a book that I simply must recommend to you before I even finish it. If you have a sense of humour or  if you have half an interest in the earliest evolution of computers, you will enjoy The Thrilling Adventures of Lovelace and Babbage by Sydney Padua as much as I am doing.

On the face of it, it is a graphic novel that accurately describes the Victorian 1830s relationship between the eccentric polymath Charles Babbage and his accomplice, Ada, Countess of Lovelace (the daughter of famed poet Lord Byron). When Ada translated her friend Babbage's plans for the "Difference Engine," her lengthy footnotes contained the first appearance of the general computing theory—one hundred years before an actual computer was built. Whilst Padua's cartoon telling of the story is thickly laced with humour, her copious footnotes provide an unexpected level of detail to the story.

So far so good, but the book really gets into its stride when it moves into a parallel universe. In the real world, Lovelace died of cancer soon after her publication, and Babbage never built any of his machines. In Padua's parallel universe, Lovelace survives, Babbage does build his Difference Engine, Lovelace smokes a pipe, and they both get into many madcap adventures where their analytical minds and the Difference Engine can save the day.

Yes, it is all a bit surreal! But I'm loving it, and I think it provides a good read for people of all ages. It may just even encourage one or two non-technologists to turn their imagination to computing.

Available from all good book stores including Amazon UK and Amazon USA. I bought my copy as a Kindle edition and I've found it very readable on my 7" Nexus tablet (be sure to read the pop-up instructions in Kindle which tell you how to scroll one panel at a time through the graphics).
Posted by Unknown