In recent weeks I've mentioned SAS Studio in passing but it's a strategic product for SAS and it merits a proper description.

It's strategic because there is a clear trend for SAS to produce "thin" web-based user interfaces rather than "thick" applications that need to be installed on each and every user's PC. The broad adoption of HTML 5 in modern browsers means that SAS can provide rich functionality without being tied to proprietary technologies such as Shockwave and Flash that require plug-ins.

SAS Studio and Data Loader for Hadoop are HTML 5 web applications. Visual Analytics currently uses Flash but I fully expect that it will be fully HTML 5 within the 2016 timescale (I imagine that simpler parts of the VA interface, such as the hub, might even see HTML 5 later this year).

If I tell you that SAS Studio is a web-based interface that provides a SAS development & coding environment then you will probably be able to join the dots along with me and suppose that at some point in the future (after a few more iterations of enhancements for SAS Studio) SAS Studio will be SAS's preferred environment for general development of SAS code. But that's not to say that Enterprise Guide will no longer be available; SAS have a good track record of supporting older interfaces and functionally - don't forget that Enterprise Guide's predecessor (Display Manager) is still available and supported.

In fact if we compare the interfaces of Display Manager, Enterprise Guide and SAS Studio we can see a lot of similarity. The shots below illustrate this. 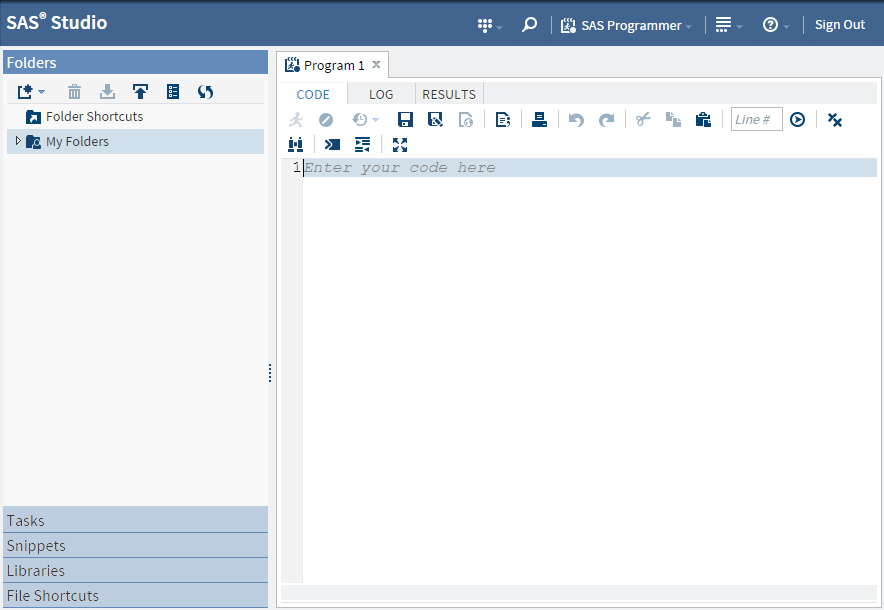 SAS continues to add valuable new features to Enterprise Guide (such as the versioning in v7.1), and SAS Studio doesn't yet have a visual coding interface, so EG ain't dead yet(!), but the convenience and ease of deployment for IT departments (which translates to lower cost) means that they will be encouraging SAS to continue to invest in SAS Studio to the point where users can be converted from EG to Studio.

So, if Studio is the future, what does it look like today?...

Well, we've established it's a web-based tool that doesn't need any software installed on  your PC. It has the SAS code editor at the forefront. You can go right ahead and start typing your code. Equally, it provides code-generation wizards for many of the tasks that we find in Enterprise Guide. And, of course, you can copy/paste the code generated by the wizards into your own stream of code.

In version 3.2, the list of tasks is categorised as Data, Econometrics, Graph, High Performance Statistics and Statistics. The list of 40 tasks seems small when compared with the 80+ tasks that I see in EG v7.1, but doubtless the list will continue to grow through each release of Studio. Basic data manipulation tasks that are not included in Studio include the Query Builder (a rich tool for building SQL queries in EG). And when you get into the detail with some of the functional elements you see further "enhancement opportunities", e.g. try filtering the table that you are browsing and you will be presented with an empty box in which you are expected to simply type a where clause.

One shortcoming I've found (but you may see it as a positive feature) is that Studio doesn't give me the ability to open (and save) SAS code on my PC - it only allows open and close from the server. You may see this as a drawback or as a useful feature, depending on your point of view of centralised code, etc.

I've gotten some very snappy responses from my own experience with Studio: submitted code seems to get executed and the results returned far quicker than EG has ever managed. Clearly Studio has some way to go in terms of replicating some or all of EG's functionality, but it's certainly a very capable tool that will already meet the needs of some SAS users. If it takes a while to deploy a copy of EG to your new users, you should certainly think about giving them Studio as a stop-gap whilst they await the installation of EG. They might like it so much that they stay with it and don't use EG!

Further information can be found in the SAS Studio User's Guide. You can see SAS Studio in action in SAS's YouTube contribution named Working in SAS Studio. The best way to check-out Studio is to see it yourself: either download the University Edition, or sign-up for the AWS version. Try the future, today!
Posted by Unknown